Categories In the News Press Releases 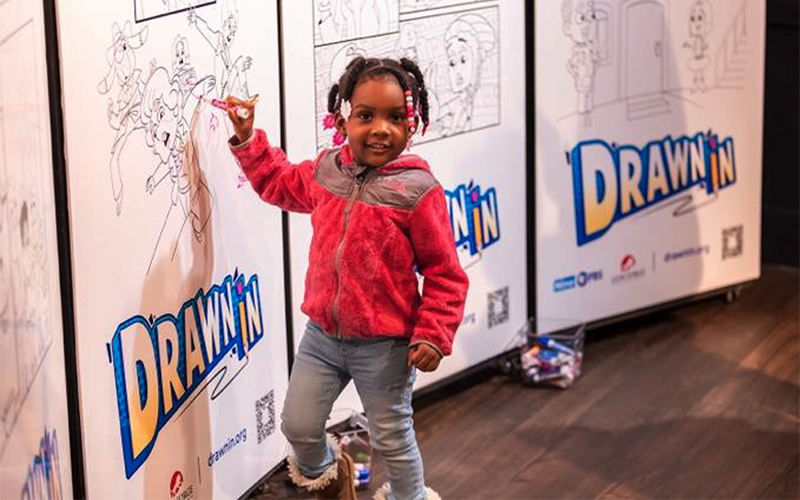 Over 140,000 Drawn In Comics Have Been Distributed to St. Louis Public School Children to Date

St. Louis, MO—December 2, 2022—From producers Lion Forge Animation and Nine PBS comes a broadcast special showcasing the new kids’ animated adventure, Drawn In. Designed for kids 6-8, Drawn In was created with deep input from the St. Louis community to meet critical literacy needs and ensure the most authentic characters and stories. Animated shorts anchor the broadcast specials with new live action segments added to reinforce the literacy goals in each show.

The broadcast special is the latest component in the comprehensive initiative designed to help close the literacy gap and positively represent kids of color.

The epic adventure stories follow four kids from the fictitious Midland City who share a love of comic books. The Drawn In stories are shared through animated video shorts and print and digital comic books. To date, Nine PBS has hosted over 56 Power Hour literacy workshop sessions and over 140,000 comics have been distributed through partnerships with the St. Louis American newspaper, St. Louis Public Schools, St. Louis Black Authors of Children’s Literature, and more. In addition, Nine PBS has hosted over 56 Power Hour family workshop sessions.

At an event hosted by Nine PBS on November 29, Julius Anthony, President of the St. Louis Regional Literacy Association, spoke of the urgent need for representative literature today. He mentioned in his remarks how wonderful it is that finally [in the 21st century] we have an animated series and comic books by Nine PBS and Lion Forge that focuses on protagonists that are Black and Brown. “That’s huge! That is really, really huge!”

Amy Hunter, Vice President of Diversity, Equity and Inclusion at Caleres and one of the community advisors on the Drawn In initiative, said, “Drawn In is a real representation of the brilliance of children of color. It is a mirror and window into the reality that anything is possible, and all children are capable problem solvers.”

Starting in St. Louis, with the intention to expand nationally through public media stations, the creative team intently listened to community advisors before any content was written, drawn, or produced to ensure the stories, settings, and characters authentically represented the needs voiced by the community. Community advisor Lisa Greening, Literacy Project Director at Turn the Page STL, shared, “Children in our St. Louis region are struggling to read proficiently. To combat this crisis, it will take everyone (not just teachers in classrooms) to provide the necessary building blocks of literacy. By being on the Advisory Committee, I was particularly proud of the intentional literacy elements in Nine PBS’ Drawn In, including the introduction of essential vocabulary words, background knowledge, speaking, reading, writing and listening. The characters in Drawn In also model reading and a love of comic books.”

There are many ways kids and grownups alike can get “Drawn In.” Digital comics and animated video shorts are available at drawnin.org. Educational games are coming soon. A link to supportive resources for parents and teachers to keep the learning going at home and in the classroom is also available on the site.

Broadcast of the two Drawn In specials will debut in back-to-back starting December 5 at 12:30 pm. A full list of broadcast dates on Nine PBS can be found by searching for Drawn In on the schedule here.

About Lion Forge Animation
Lion Forge Animation is based in St. Louis and sits within David Steward II’s holding company Polarity, a diversified global media company with a mission to bring authentic content to a diverse global audience. To create a richer content experience and offering, the company believes in the value of embracing diversity and highlighting previously unheard voices, as well as new and emerging views and voices. The Polarity portfolio includes Illustrated Syndicate and Magnetic Press, as well as Oni-Lion Forge Publishing Group.

A recognized leader in bringing authentic content focusing on underrepresented voices and experiences to worldwide audiences, the studio was behind the Academy Award®–winning, culturally resonating short, Hair Love, directed by Matthew A. Cherry, and is one of the only Black-owned animation studios in the world and is unmatched in size and scale. It is the only Black-owned animation studio with an Oscar®.

Lion Forge Animation continues to expand its IP portfolio with the development and production of TV series and feature films. Upcoming projects include a Hair Love spinoff series (Young Love) for HBO Max; an animated series based on Cedella Marley’s picture book Marley and the Family Band; the animated series Heiress with BRON; Rise Up, Sing Out, executive produced by Grammy-winning artists Tariq “Black Thought” Trotter and Ahmir “Questlove” Thompson, for Disney; multiple projects with Imagine Kids + Family including Chippy Hood, First Step, and Bugtron; and new series based on the multiple award-winning Excerpts from an Unknown Guidebook book series, alongside Folktellers Studios.

About Nine PBS
Nine PBS, an award-winning and community-owned public media station, magnifies and deepens understanding of our community to help our region flourish. Nine PBS tells authentic stories about the St. Louis region, which promote understanding and build empathy. By providing free access to entertainment, kids’ programs, documentaries, the arts, trusted news, and more, the station ensures learning opportunities for everyone. It creates local content by listening to the community and building partnerships with trusted organizations. It is driving change by creating awareness and action while measuring the impact. Nine PBS has led numerous national content and community engagement initiatives that have created durable change in local communities based on this model.

In 2011, Nine PBS led PBS stations in the American Graduate initiative to rally communities to improve outcomes for youth. In partnership with a network of trusted community organizations, it harnessed the power of telling authentic stories to create change. Stories about young people and educators enabled partners to serve more students, teachers, and parents and helped activate community members to improve youth outcomes in graduation rates, careers, and life.

Nine PBS’s community impact initiatives are designed to address inequalities in education and workforce development by leveraging unique media assets and a network of trusted partners for greater impact. The on-air classroom series Teaching in Room 9 was a response to a call from the community to provide remote learning resources for children not in school during the coronavirus pandemic. The series has grown and flexed to meet current community needs and is now focused on increasing kindergarten readiness.

Nine PBS’s multiplatform approach includes four distinct broadcast channels (Nine PBS, Nine PBS KIDS®, Nine PBS World, and Nine PBS Create), digital platforms, the PBS Video App, streaming services, live and virtual events, and the Public Media Commons. For nearly 70 years, Nine PBS has accepted the community’s invitation into their homes, schools, and businesses. With accolades too numerous to count, including 82 regional Emmy awards, Nine PBS is most proud of the awards that demonstrate its impact, from What’s Right with the Region to being named a 2021 Neighborhood Builder. Pictured at top of page: A young fan enjoying the coloring wall at the Drawn In Launch Celebration. Photo Credit: Cross Grand