The statue General Ulysses S. Grant is a public tribute to Grant, who resided in St. Louis for six years. While here, he met and married Julia Dent and unsuccessfully farmed the land on Gravois, known today as Grant’s Farm. Grant held many jobs here, including selling real estate and clerking in the Customs House. He applied for the position of County Engineer, but was rejected and finally moved away to work for his father-in-law before he became the 18th President of the United States.

The sculpture, a gift of the Grant Monument Association, was unveiled in 1888 on a site in the middle of 12th Street between Olive and Locust. Once the new City Hall was completed in 1898, the sculpture was moved to the south entrance. The Grand Army of the Republic, objecting that the south entrance was the ‘back door’ persisted in getting the city to appropriate $1,500 in 1915 to move it to its current location. 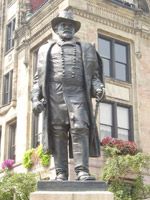 Bringhurst’s interest in sculpture began at a young age, when he took a job in the marble industry in order to support his widowed mother and younger brothers. He quickly became a skilled carver, and continued on to both study and teach at the St. Louis School of Fine Arts. He also studied at the Ecole des Beaux-Arts in Paris, where he cultivated an interest in poetic themes and modeling from life.