Saint John Baptist de LaSalle, founder of the De LaSalle Christian Brothers, is honored in a statue at Christian Brothers College High School in St. Louis. The saint, shown with books in hand and two young boys at his feet, is depicted as a scholarly leader. De LaSalle was born in 1651 into a wealthy family in Reims, France, and studied theology, eventually becoming a priest and a Doctor of Theology. His concern for the poor and his belief in education convinced him to dedicate his life to opening primary schools, boarding schools, and teacher education centers across France. The schools that de LaSalle opened were the very first Catholic schools. He died in 1719 in Rouen, France. Saint de LaSalle is the patron saint of teachers. 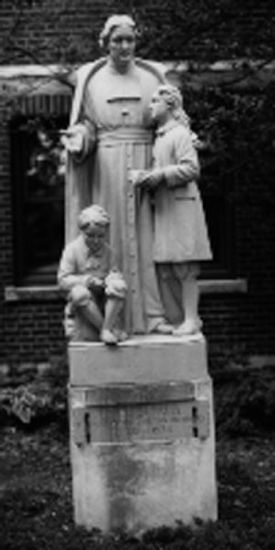