This larger than life bronze sculpture depicts a faceless Tai Chi practitioner in a basic pose known as Single Whip. The artist, Ju Ming, studied Tai Chi Chuan, the Chinese martial art that originated nearly 1,000 years, and has sometimes been described as moving meditation. Tai Chi exercises are designed to develop harmony between the body and the mind, and the individual are the universe. The spirit of Tai Chi Single Whip presents contrasting, yet complementary, elements-the cold, hard nature of bronze contrasted with the grace and controlled movements of the figure. 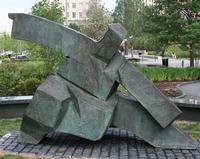 Ju Ming was born in Miaoli, Taiwan in 1938. From 1953-57 he was apprenticed to a Buddhist statuary craftsman, before he started sculpting. From 1968-76 he studied with Yuyu Yang, and by 1998 he’d won many awards and exhibited internationally. The Ju Ming Museum was started in 1999.