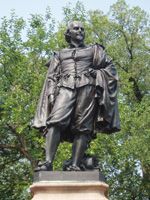 Born in Munich, Germany in 1842, Ferdinand von Miller II was the son of the founder of the Royal Bronze Foundry, where many of America’s major nineteenth century monuments were cast. While managing his inherited business, he also worked as a sculptor in stone and bronze. From 1900 to 1918 he was the Director of the Munich Academy. His statue William Shakespeare, unveiled on the 314th anniversary of Shakespeare’s birthday, shows the poet in Elizabethan clothes with quill pen in hand. Four bronze plaques depict characters in Shakespeare’s plays: Falstaff, Hamlet, Lady Macbeth, and Queen Katherine. When the famous Shakespearean actress Adelaide Neilson visited St. Louis in 1880 she commended the statue as the best likeness she had seen, and promised to send a cutting from the Shakespeare Mulberry tree at Stratford-on-Avon to be planted near the statue. However, her death a few months later prevented her from fulfilling her promise so Shaw imported one himself and planted it behind the statue with a marker honoring Miss Neilson.